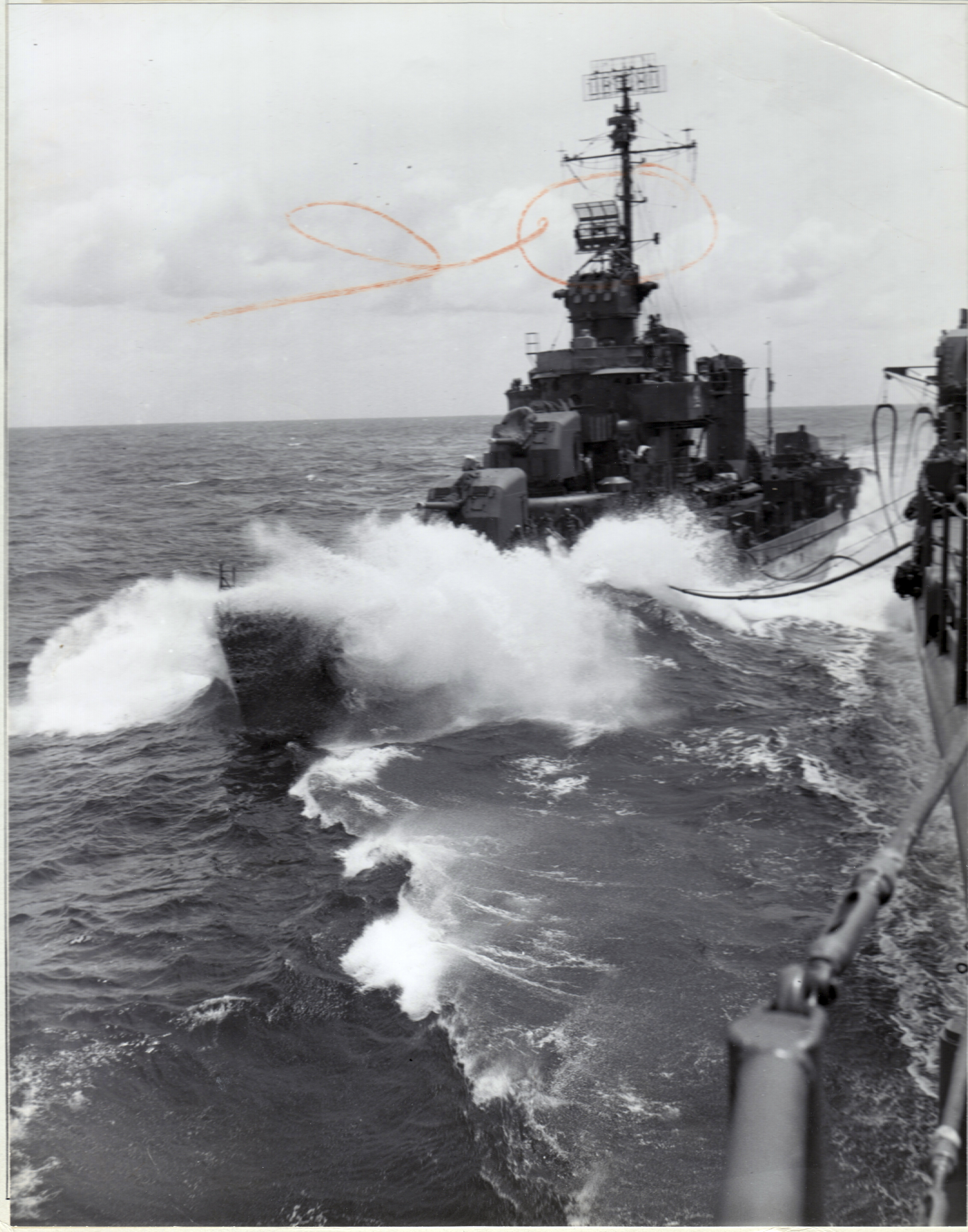 I came across this picture when I was looking at Photographs from NARA.   Obviously this was censored because it showed the top secret radar installation on the destroyer next to the Boston.

When the Boston returned in Early 1945 to San Diego, the radar and fire control systems were upgraded.   Radar was a huge factor in the War in the Pacific. I just returned from the National Archives in College Park Maryland, where I was able to find some really interesting things about the USS Boston.  I had three strategic goals, find the rest of the crew members  on the Boston that I don’t have, expand the info and picture library, and copy the entire Decklog of the Boston.  As usual with trips to NARA, I mostly accomplished everything, but I’ll need to return to get more info.  This is absolutely how things go at a place with all the info hidden in boxes and researchers who need to find out more info.

In terms of my goals, here is my report: I found the 20-40 marine names who were assigned to the Boston from Jun of 1943 to February of 1946.  I ran out of time to get the last 6 months of marine records before de-commissioning.  I have not yet found records of the Aviation group.  I was able to photograph the Decklog: it runs about 3500 pages from commissioning in June of 1943 to decommissioning; I’m planning to have two organizations of the decklog, first in month order so it can be read online, and second as a series of files like the Personnel file that can be placed as references to Sailor records.  In the decklog I found info that two Admirals, leaders of Cruiser Division 10, were on board from Dec of 1943 to February of 1944.  With the Brass also comes the worker bees: over 20 Marines supported the Admiral and 20-50 sailors had permanent places on the Boston during the admirals stay.  My daughter Rivka helped photograph and scan pictures; We’ve done a lot of this before, but never so organized!  So as usual we got lots of info, but need more! 🙂

As I was reading more of records I was copying, I read one interesting nugget: The USS BOSTON held 730,000 Gallons of fuel oil when fully loaded and used about 38,500 gallons a day!  Wow!  That’s quite the load of fuel.  Success in the Pacific for World War II depended on the US being able to deliver fuel and food to ships operating 1/2 way around the world.  This leads me to Ulithi atoll.  When the US found this atoll it had people who were very primitive, living in a group of islands with on of the largest natural harbors in the world.  The US relocated some of the tribesman off of MogMog island, built a runway, and a rest and relaxation station, and proceeded to build the greatest Floating harbor that’s ever existed.  As many as 700 ships, including the USS BOSTON were anchored at Ulithi harbor between battles.  Logistically, fuel and supplies were delivered to Ulithi to support the fleet.  The exisitance of Ulithi was a secret until after the operations had been moved closer to Japan and by then it was only a memory for sailors and history buffs!

Tonight I have finished entering all the arrivals and departures of all the sailors of CA-69!  We have 3,022 sailor records, as of tonight all their arrival and departure information is complete along with all of their promotions!  Yeah!

So what’s with 1 and 1,217?  When I look at the data, we had two sailors attend the commissioning ceremony on June 30,1943 and they were re-assigned the next day!  They each spent 1 day on the Boston: They are Robert B Johnstone and Robert J Duren.  These are the shortest services on the Boston in my records.  On the other side, five sailors spent 1,217 days from Commissioning to Decommissioning on the Boston with only the normal leaves given to all sailors.  These five had no time off the ship in Hospital, or temporary duty.  They were Robert Earnest Lafavour, joined as a seaman second class, he was from the New Hampshire area, he was promoted to Seaman first class after nine months on board, 11 months later he was promoted to Coxswain, after 3 years and almost 4 months we and his other 4 sailors who spent the most time onboard, departed on the USS BALTIMORE.

Ralph Sydney George is next, Ralph came to the Boston as an experienced sailor also enlisting in 1941, he was a ShipFitter.  He had a bit of a rough patch with a demotion on board, but he regained his rank over his long service on the Boston.

Robert Emile Haas, came to the Boston as a raw recruit, a Seaman Second Class.  He was promoted the Seaman first class after 14 months on board and he departed the ship as an Seaman 1st class.

A few numbers: There are 3,022 sailor records, with 2,707 promotions.  The records include 6,476 individual transactions of sailors arriving and leaving for both temporary assignments and permanent transfers.  The most sailors onboard at any one time is 1,592 sailors May of 1945.  Over the next months and beyond I’ll be finishing the discipline records and working on notes and decklogs to bring interesting stories… As I work with the data from the Sailor Database I have been noticing trends, It’s faster to be promoted as a Fireman 3rd class than to a Seaman 1st class. In fact if your selected to be a fireman, you’ll be promoted six times faster on the Boston in world war II as a fireman than to a Seaman 1st class. The promotion time from Seaman 1st Class to Coxswain is about twice as long as the path from Fireman 3rd class to Fireman 2nd class. So Seaman 2nd class sailors selected to be Firemen can have 4-6 promotions in 2 years, where sailors slotted for Seaman 1st class will have on average 1-2 promotions.

I’ve just finished updating the arrivals and departures for April 1st 1946. In March, the Ship was in San Francisco where Sailors were busy some arriving an most departing. The war officially ended in August, but the Navy needed to move lots of men and supplies around, so some Boston veterans departed in september, some in October and November, and many sailors in January to March. As of April 1st 1946, there were 650 sailors on board, at this point 2,980 sailors had spent between 1 day and 1,000 days on board. On this day April 1st, 77 sailors are still on board from the commissioning on June 30, 1943. About 1/3 to 1/2 of the boat’s sailors on April 1st, 1946 are new to the boston, added from January to March. About 200 sailors were added in November and December of 1945 in japan and they left the ship when it arrived in San Francisco in February and March. The ship is being prepared on this date to go to Washington State for it’s eventual decommission in the fall of 1946.