Here are three “inside” shots of Christmas decorations on the ship in 1945.   How they got these items is beyond my guesses.   The fourth shot is Midnight Mass.     I am also adding a pdf file of the “events and activities” booklet.   The late Bob Knight loaned me a box of newsletters and programs so I could scan them.

The “Bostoner” calls out many of the activities in these photos.   To launch this pdf file (Yule45), you’ll need to click on it and save it somewhere (desktop, documents folder, etc.) 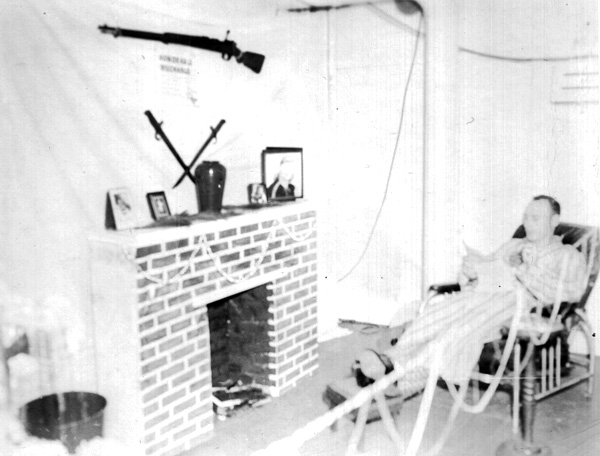 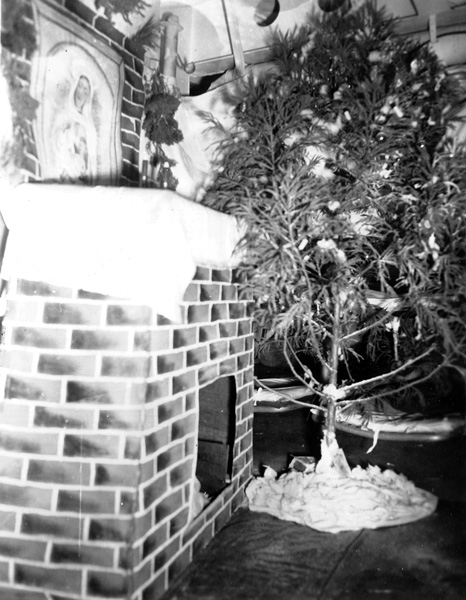 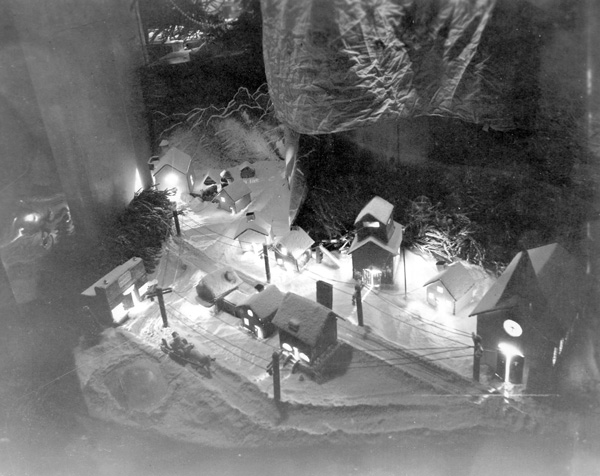 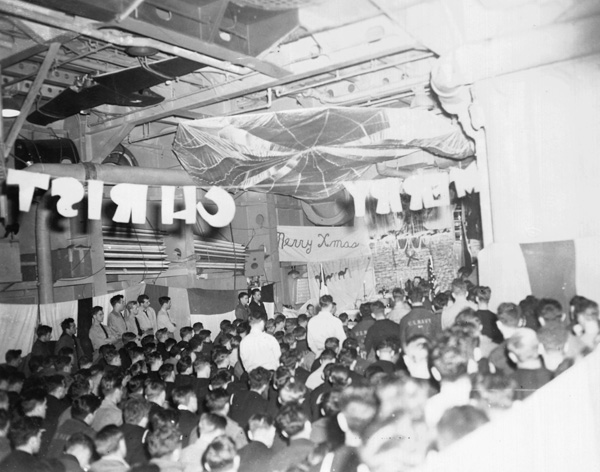 While I was working on the Baked Beans books, one day I got an email from Dirk Oster. he explained that his dad, Bernie Oster, was the ship’s photographer.   He had a bunch of old snapshots of the ship that his dad took. They weren’t marked or dated. He wanted to know if I was interested . . .

In the revised books (USS Boston in World War II), I used many of the pictures he sent.   There was a batch of them that at the time didn’t make any sense.   Pictures of Christmas decorations in the ship. Pictures of Santa.   As I absorbed info about the ship during the war, I finally got it.   Here were pictures of the last Christmas in Japan – December 1945 –   Occupation Duty.

I’m going to share some of these in two chunks:   “Outside” shots of a Happy Hour, and “Inside” shots of decorations.   (These are scans of seventy-year-old B&W snapshots, so . . . . )

I will follow up with more snaps of the decorated ship.

The Boston was ordered on November 21, 1944 to detach from the rest of the Task Force (enroute to Ulithi Atoll) and report to drydock at Manus Island (Admiralties) for an overhaul.   The ship arrived at Seedler Harbor (Manus) the the day after Thanksgiving, November 24. 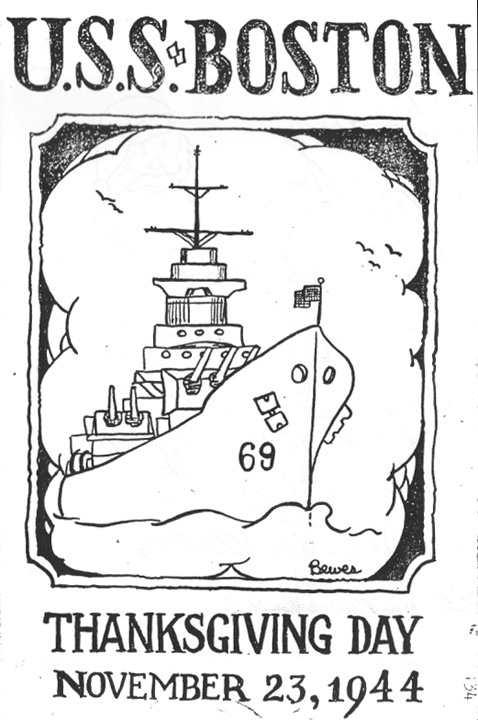 September 4, 1945:
Today after the Peace Treaty was signed a lot of the ships from the task groups were headin back home with “Homeward Bound” pennants flying.   We watched a lot of ships leaving Tokyo Bay.

OCCUPATION DUTY:
We received orders to form a task group for occupation duty.   The task unit composed of the Boston, two destroyers and an U.D.T. , the unit is commanded by our captain. Our duties were to move up and down the coast of Honshu, to inspect and insure demilitarization of Japanese coast defense, suicide boat bases and midget submarine bases.   We got underway from Tokyo Bay on September 8th   for Katsuura, Sendai, Yokohoma, Kataura Ko, Inubo Zaki, Wakayama, Hiro, Kure, Nagoya on the east coast and inland sea of Honshu and Kogoahima, Nagasaki and Sasebo on Kyushu Island . . .

Occupation Duty is an “under-reported” part of the War.

Thanks to Frank Studenski who wrote his amazing War Diary of his days on the Boston.     Without his diary, it would be hard to piece together anything more than a glimpse of what it was like to sail aboard CA-69.

. . .   The ship remained in Japanese waters until January 28, 1946, when she left Kure Harbor for the return trip to the states.   She arrived at San Francisco on February 190th and left for Puget Sound Ship Yard, Bremerton on April 3, 1946 and arrived on April 6, 1946 and went into the inactive fleet. On October 26, 1946 she went into the mothball fleet.

A while back, we got an email from May Koenig, telling us she has a picture of her grandfather, Clyde W. Day in uniform. She sent it in, and Bill added it to this site’s crewlist.   I then asked her if she could tell us a little about him.

Her reply:   “He was one of my favorite people ever. I am named after his sister. He was compassionate, honest, hard-working, and a great example to everyone in our family and beyond.   He was an engineer after he left the Navy, and after retiring, he ran a clock repair business until he was 95!     He volunteered thousands of hours with the local hospice and other organizations, and was a pillar of the community.   Here is a link to his obituary if you’d care to read it  http://www.kingsvillerecord.com/obituaries/clyde-wickliffe-day/article_08b26078-920d-11e9-9770-07e4c3e97d6c.html