Pat was a plankowner, and like my dad and hundreds of others, spent months in Boston waiting for the ship to be finished before mustering aboard and heading for the Pacific. Pat worked hard to earn promotions while on board, and rated COX in January of ’45. I have lots of stories to share – another time. 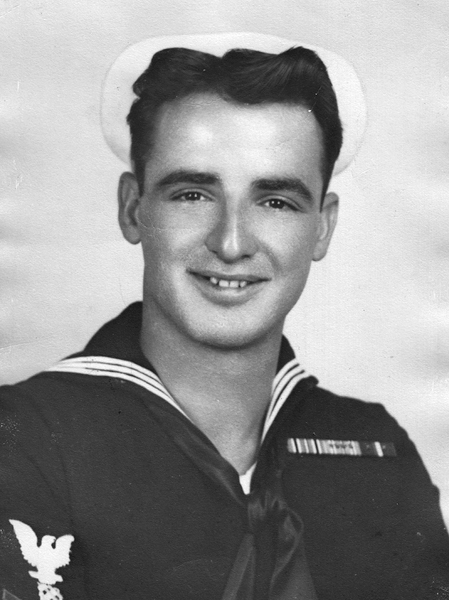 So, I have finished first and second drafts of my story, and after input from friends and family, I am in the middle of a “third rewrite”   –   this time with some significant new paths and bends in the road.   Looking at my emails over the last year, I found that some submissions from readers got back-burnered.

Here’s one (from Joe Green – dated Nov. 20, 2019 [yikes!!] ). He submitted two pictures of some of his dad’s papers.   Here’s his message to Bill:   Attached a couple of relevant documents of my dad’s – his discharge from the naval reserves in 1954, and a commendation from the Commonwealth of Massachusetts. I think by the time he was discharged he had acheived the rank of Lt Colonel.

One interesting story he told –   there was a crewmember who was generally disliked and notorious for welshing on his gambling debts. One morning roll call in the middle of the Pacific, he just didn’t show up. The ship was searched, but he was gone. It was presumed he was tossed overboard in the middle of the night.   Spooky story.   Joe Green. 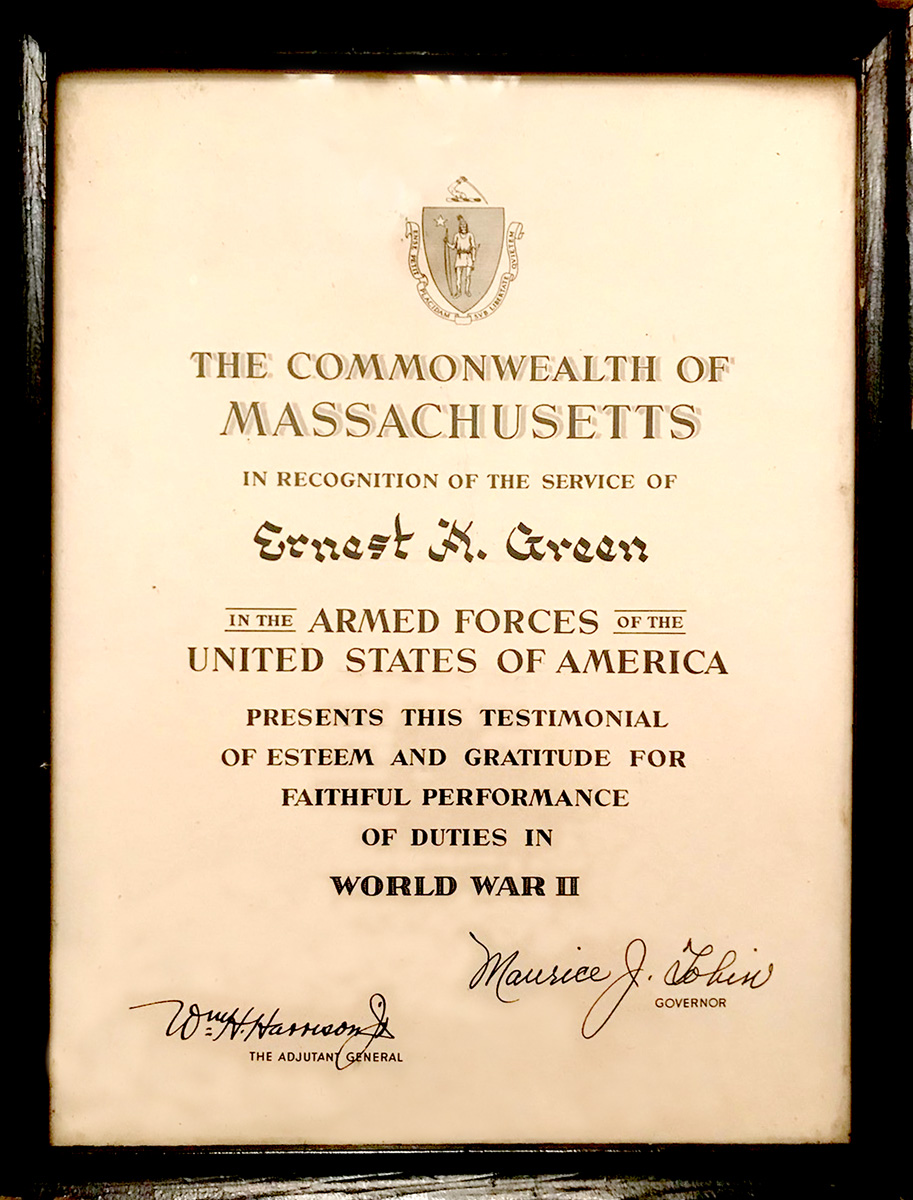 Ninety-five year-old USS BOSTON plankowner Thomas R. Williamson is visiting his son David at his home in the Boston area.

David reached out to me.   During several email back-and-forths, David       ordered a set of books for his dad.

(Not meant to be a shamelss marketing ploy.   It’s the only picture of Thomas that I have.)

Mr. Williamson mustered onto the Boston on Commissioning Day. If you look at his crew record, you will see that he was transferred off the ship on August 19, 1944. He was assigned to ComCruDiv10 (Admiral Thebaud).   You may remember that the ship was anchored in Eniwetok lagoon for the month of August, during which time there was a change of command in the cruiser division (Admiral Wiltse replaced Admiral Thebaud.)

Last month I posted about Cloyd Fair, one of the ship’s barbers.   He mustered onto the Boston on Commissioning Day, along with a full crew of mostly fresh-out of – boot-camp sailors.   But Cloyd saw some duty before coming to the Boston; he was a barber on the Arizona. He survived the sneak attack on Pearl Harbor and the sinking of his ship.

Today I want to tell you about another plankowner who mustered onto the Boston on Commissioning Day: Victor K. Conner of Pleasant Plains, Illinois. Like Cloyd Fair,   the Boston wasn’t Victor’s first ship.   He was a machinist mate on the USS Wasp (CV-7) as she plied the South Pacific.   CV-7 was escorting troop transports to Guadalcanal when she was torpedoed on Sept. 15, 1942.

Victor’s son Vic reached out recently, sending me a picture of his dad.   He shares his and his siblings’ memory of their dad’s experience:     “he spoke about the time the USS Wasp was torpedoed.   He worked in the boiler room as a machinist mate with secondary training as a fireman.   When the first Japanese torpedo hit he was thrown to the ground and the second one stood him back up again. As the ship was severely damaged, all the sailors began exiting the ship anyway they could-all except the boiler men who had to remain below deck to back the ship out of oil leaking from the damaged ship.

When Vic and the other men could leave, it was the USS Duncan that came along and swept them out of the water on ropes catching the men like fish. When he was aboard the Duncan, he and the other men that were rescued sat together on canvas tarps.   The tarps were sticky, and sadly he found out that they were actually sitting on the bodies of fellow shipmates that had been covered by the tarps. He also spoke of the horrors he saw in the water as they pulled away from the burning vessel.”

(If you want to read about another Boston guy whose ship was sunk, check out my post from 2 years ago about Lester Zook.   Type in “zook” on the search icon on the main page.)

About a month ago, I got emails and a book order from Brian Fair. His grandfather served on the ship, and he wanted a set of “Baked Beans.”
I shipped them off and then he sent me a few pics of his grandfather,     a copy of his discharge papers, and a “bio sheet” that his grandfather wrote about his service in the war and on the Boston.

Ok   –   so you can see that Cloyd served on several ships in the War.
I’ve transcribed his “bio sheet” :

Serving with the Third Fleet, I slept late Sunday morning – slept 1 deck below barbershop. Missed breakfast- was sitting in barber shop drinking coffee and eating coffee cake, only with my shoes and skivvies on when the first Japanese plane flew over Dec. 7. The color guard was just raising the flag. I saw planes with the rising sun emblem. I realized it was a Jap attack. The barber shop had 2 portholes. I looked out – the USS Nevada was under heavy attack but just got underway. I closed the porthole then started to my 5 inch battery station. I never made it. I was climbing up the ladder – met a gunner’s mate coming down. He asked where I was going. I told him and he said don’t go up – there are a lot of people already trapped. Then a bomb hit in the Ammunition box. Lot of people killed where             I was supposed to be.   I joined the first aid station. We ran out of materials. I was told to rip bed covers and sheets for use later. Later the chief came down the hatch – his right leg was almost blown off.                 I never knew what happened to him.
I was transferred to USS Phoenix Dec. 10, 1941, serving until May 1943, then served on USS Boston during invasion of Marshall Islands.   I was discharged as SSMB first class, Dec. 1946. Medals: American Defense, 1 star; Asiatic Pacific, 15 stars; Good Conduct; Victory Medal.

Note: Cloyd did not only serve on the Boston for the Marshalls campaign. He was a plankowner – mustered aboard with all the others on Commissioning Day (June 30, 1943), and he served all the way through the War until after the Surrender in September, 1945.